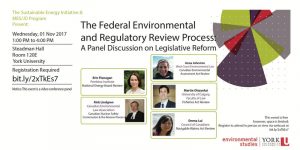 The purpose of this panel is to assess progress on the federal government's review of key federal legislation, including CEAA, the National Energy Board Act, Fisheries Act and Navigation Protection Act, and to discuss likely next steps in the process. All are welcome, but registration is required via Eventbrite.

Erin Flanagan is the director of the Pembina Institute's federal policy program. In this role she spearheads national policy campaigns on climate and energy issues – including on carbon pricing, electricity sector regulation and environmental law reform – and supports the Institute’s regional priorities in Ottawa. Erin researches and promotes public policy solutions that reduce the environmental impact of fossil fuel development and that support Canada's transition to clean energy. As a technical analyst at the Institute, she contributed to public- and private-sector projects on a range of issues in the oilsands, including greenhouse gas and water management, tailings treatment, and land reclamation.

Emma Lui is the lead water campaigner for the Council of Canadians.