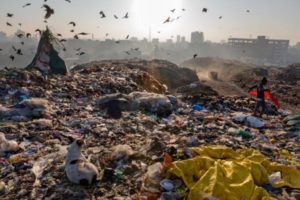 Concern about single-use plastics has come to the forefront of the public’s attention, with a rising wave of support calling corporations to reduce their use. At a result, restaurants such as Harveys and East Side Mario’s are adopting biodegradable straws, while grocery stores such as Sobeys and Freshco are moving away from plastic bags.

There is plenty of scientific evidence to show that plastics are harmful to the environment. Studies have shown that greenhouse gases are emitted throughout every stage of the lifecycle of a plastic, meaning that plastics also contribute negatively to climate change. Yet, 300 million metric tons of plastic are produced globally every year, of which 50% is made for a single use. These have significant impacts on human and environmental health, as discussed in a new study released by the federal government released in January. The report found that plastic packaging is the number one source of plastic waste in Canada, and concluded that single use plastics make up the majority of the litter found in freshwater environments.

In addition to these immediate harms, plastic is incredibly durable and can last for centuries, if not millennia. Its long life combined with the scale of production means landfilling is not a viable option. Recycling has generally been seen as an environmentally friendly method of plastic disposal, however there are difficulties collecting and sorting the waste. Only 9% of 3.2 million tonnes of plastic waste created in Canada is recycled. There are also problems with Canada’s reliance on shipping its plastic waste abroad. China and other countries refusing to take Canadian waste has led to major problems for Canadian recycling programs, and even international disputes.

The Legal Issue and Context 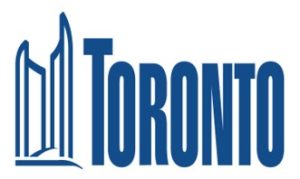 The City of Toronto has a duty to provide good government to the people living in it, determine what is in the public interest, and respond to the needs of the people. One tool it can use to fulfill these duties is its by-law making power.

By-laws are how cities in Ontario exercise their law-making power. The process starts with a draft by-law, also known as a bill, created by the City Solicitor. From there it is added to the Committee agenda, then the Council agenda for consideration. If passed, it becomes a by-law which is added to the Municipal Code.

As there is no specific power to pass by-laws relating to single-use plastics, it is likely that it would fall under section 8(2)(5) of the Act. That section states that the City can pass by-laws relating to the “[e]conomic, social and environmental well-being of the City, including respecting climate change”. As plastics have a significant impact on the environment, arguably this section could be used to uphold such a by-law. 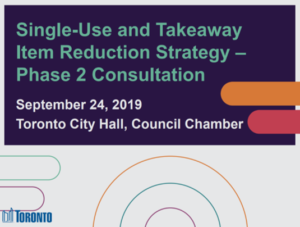 The City of Toronto has been in the process of getting public feedback on how to reduce “single-use and takeaway” items in Toronto. They conducted a public event in September to look at different ways to approach this issue. For example, a “by-request by-law” would require customers to ask for disposable eating utensils. The City could also impose a fee for single-use cups or bags. The City hopes to create a Report to Infrastructure and Environment Committee and City Council by spring 2020. Consultations have also been ongoing in other Canadian cities, such as Vancouver and Montreal.

The Powers at Play

One issue that may arise is jurisdiction. In Canada, municipalities are created by provincial law, and thus have no constitutional status. There have been previous cases about whether municipalities have authority to pass bans like this, or whether that is a power better left to provincial or federal governments.

The most prominent case on this topic in Canada is Spraytech v Hudson. The case centered around whether the town of Hudson had the ability to restrict the use of pesticides and whether this conflicted with federal or provincial laws. The Supreme Court of Canada found that the town did have the authority to do this under a broad power similar to that in the City of Toronto, 2006. The Court also found that the test to see whether the by-law conflicts with federal provincial legislation is the impossibility of dual compliance test – whether complying with one means you cannot comply with the other. In this case, it was possible to both comply with the town’s by-law as well as provincial and federal laws. This case showed a generous reading of the authority municipalities have to pass by-laws, and was confirmed in the Ontario case Croplife Canada v Toronto (City). 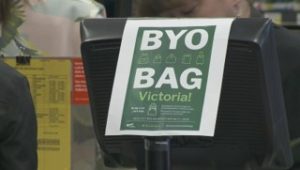 A more recent case on this issue is Canadian Plastic Bag Association v Victoria (City). In this case, Victoria attempted to enact a by-law banning single-use plastic bags. The Canadian Plastic Bag Association argued that this was invalid as the by-law was about the environment and so required approval by the Minister of the Environment, which the City did not have. The City argued that the by-law was actually about the regulation of business, however, and quashed the by-law. The Supreme Court of Canada just dismissed Victoria’s appeal. Although this is disappointing for Victoria,  the same reasoning would not apply to a Toronto by-law. This is because section 8 of the City of Toronto Act allows the city to enact by-laws in the interest of the environment as long as there is no conflict or frustration with provincial or federal instruments or Acts. As such, Toronto does not face the limitations that prevented Victoria from being successful in banning plastic bags.

Therefore, if Toronto does choose to pass a by-law banning the single-use plastics, it is likely that it would have the authority to do so. In the interim it will be important to keep an eye on the federal government’s plan to ban single-use plastics.