Why Environmental Lawyers Should Care About Gentrification

The early environmental justice movement fought against the disproportionate placement of toxic waste facilities and other locally unwanted land uses (LULUs) in low-income communities of color. More recently, environmental justice movements have expanded their advocacy to include access to social and environmental benefits such as, transit, decent jobs and affordable and healthy housing. However, access to these benefits for low-income people in urban areas is being threatened by intersecting processes of gentrification and financialization.

Gentrification can be defined as the influx of middle and upper class into low-income and working class neighbourhoods and creation of city space for the affluent. Geographer David Ley argues that low-income areas will be “entered” by the upper-middle class when they have good housing stock, and are located near downtown and other amenities such as parks.

Though some have argued that gentrification may be achieved without displacement this is rarely, if ever, the case. Rather, gentrification generally causes an increase in rent and housing prices, forcing out low-income residents. Without access to affordable housing, some are pushed away from the city centre, where there is uneven access to services, while others may face eviction and homelessness.

Environmental lawyers, and all lawyers generally, should care about and work against gentrification because of its negative impacts on the liveability of cities. The liveability of cities relates not only to the availability of affordable housing and other essential services, but also more broadly to the commodification or privatization of city space. This commodification of land results in more private and exclusive spaces for the wealthy, and less welcoming, diverse and freely accessible spaces for all.

Toronto, for example, is becoming unliveable for most. Since 2006, the City has seen a 323% increase in “luxury” units that rent for over $1500 per month and a 36% decrease in those that rent for under $1000 per month. At the same time, the City has also seen a rise in privately owned public spaces (POPS), which include parks and plazas that are owned and maintained by private companies. Though meant to “complement” city owned public spaces, POPS are often heavily surveiled by CCTV cameras and private security guards, and are known to be unwelcoming to people experiencing homelessness.

Conventional lawyering strategies that aim to deal with the negative effects of gentrification are often based on a case-by-case litigation approach serving individual clients facing issues like eviction. However, lawyers must broaden their techniques to include community organizing to effectively serve their low-income clients and work against structural legal and non-legal forces  that impact the liveability of cities overall.

From gentrification to financialization: the threat to affordable housing

Gentrification is occurring rapidly across Canadian cities today. In academic scholarship, the process of gentrification has been understood as occurring in “waves.”[1] During the first and second-wave, gentrification was facilitated by individual actors such as artists and middle-class families.[2] In the third wave the state became a primary actor, which continued into the fourth.[3] According to Manuel Aalbers, academic and author of The Financialization of Housing, we are now experiencing “fifth-wave gentrification,”[4] where the state’s role is complemented by finance, and housing is financialized—it is treated as a commodity, rather than as a social good or a human right.

The financialization of housing “thrive[s] on” gentrification. Under the fifth-wave, corporations and private equity firms have emerged as landlords and rely on landlord-tenant law to facilitate gentrification. In Ontario, for example, vacancy decontrol allows landlords to raise the rent on a unit, by any amount, as soon as the current tenant leaves. This gives landlords an incentive to push low-income people out of the city in their profit-making pursuit. Through Ontario’s Residential Tenancies Act landlords may evict tenants for a variety of reasons including when they have made plans to renovate units. Renovictions, as they have been termed, have been successful for many landlords.

The problem with conventional lawyering in gentrifying cities

Often tenants do not attend eviction hearings because they cannot afford legal representation, which leads to the eviction being granted regardless of the merits of the case. Although having access to legal representation is an important protection that should be guaranteed for low-income people, a right to counsel is not enough to deal with the larger structural forces at work.

According to John Whitlow, a Professor at CUNY Law School, the right to counsel is “limited” because people who approach lawyers when facing eviction do so “after structural sources of displacement have done their work.” To better serve their clients in gentrifying cities lawyers must recognize the limits of litigation as a way to pursue social change. Litigation is a strategy that serves individuals “momentarily” but does not change the structures in which they have to operate to survive. 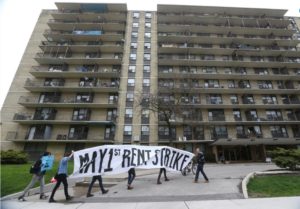 To address gentrification and the financialization of housing lawyers must shift their focus from access to justice to ensuring access to power for marginalized communities. This involves centering the work and voices of their clients through community organizing. This approach is particularly important in the contemporary housing context.

It is not enough to fight an individual tenants’ eviction. Lawyers working for access to power must understand how financialization and gentrification drive each other and how they impact the lives of their clients. They should consider why striking against rent increases by corporate landlords, for example, is an important strategy for achieving broader housing justice. Lawyers must learn how to engage in and support “community-based strategies” to help reshape cities to become less economically and socially polarized, and ensure that there are public, communal spaces for all to enjoy. For lawyers, this means not assuming that litigation is the best and only mechanism to facilitate change, and instead, working with grassroots organizations to identify structural issues and potential responses.[5]

There are important opportunities for Canadian lawyers to put this into practice. In June 2019 the Canadian federal government’s National Housing Strategy Act came into effect. The Act recognizes the right to adequate housing. Already it has influenced the City of Toronto’s new housing plan that takes a human rights approach. Though there have been attempts to “win” this right through strategic litigation, these important victories could not have been achieved without community organizations pursuing just urban futures through community-based strategies. Now, community-led implementation of the Strategy is important to actualizing improved housing outcomes for those who are the most vulnerable. Lawyers can support this work by ensuring implementation of Toronto’s plan and the national Strategy is informed and led by the people most affected and those who have fought to realize the right to housing in Canada.

[1] Manuel B Aalbers, “Revisiting ‘The Changing State of Gentrification’: Introduction to the Forum: From Third to Fifth-Wave Gentrification” (2019) 10:1 Tijdschrift voor Economische en Sociale Geografie 1 at 1.